In May 2020, the owner of SCKL heavyweight Goodie's Guns FC agreed to buy a club licence in the newly formed SuperCoach Scores Ultimate League (SCSUL), with the club to be named Goodie's Giants FC. The Giants become the second club in the GFG network, where owner Goodman himself will front the clubs football department in a combined role as coach, head recruiter and football manager among other things.

"This investment is part of our long-term strategy to be present in key fantasy football circles, play beautiful football and develop talent" said multi-billionaire Goodman in a statement made to SCSUL Media shortly after the club had secured its licence.

The inaugural SCSUL auction and draft was a huge success for The Giants, with Goodman being a dominant force on the opening night signing five key players, including the first player up for auction in star ruckman Brodie Grundy. Having secured some really good talent to round out the clubs best 22, The Giants should be a real contender come the pointy end of the season. Many SCSUL coaches are expecting The Giants to be playing off in the big dance, so it will be vitally important that Goodman handles the external noise and expectations to get the very best out of his star-studded squad.

At the clubs 2020 Season Launch, coach Tim Goodman announced that superstar Brodie Grundy would lead the club as captain. Star midfield duo Patrick Cripps and Tom Mitchell will take the reigns as Vice Captains, with Clayton Oliver, James Sicily, Nick Vlastuin and Nick Haynes to round out the seven man leadership group. 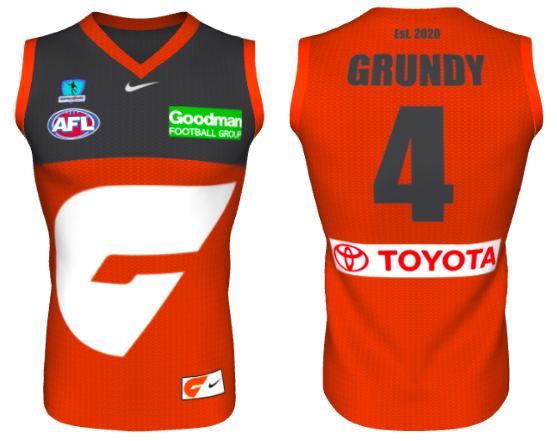 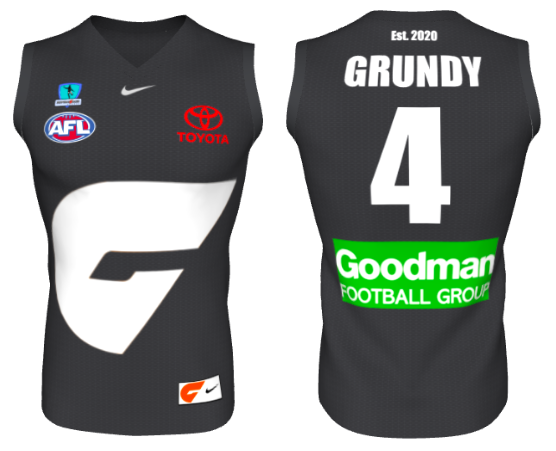 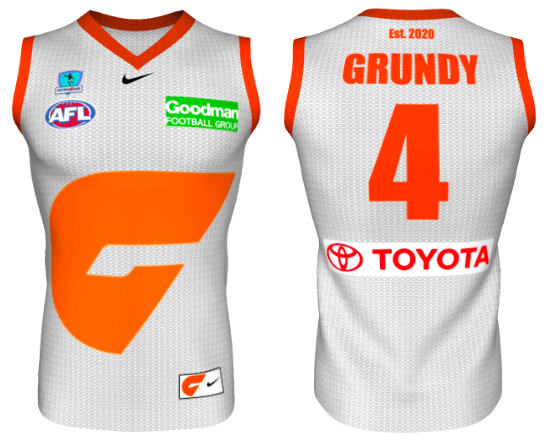 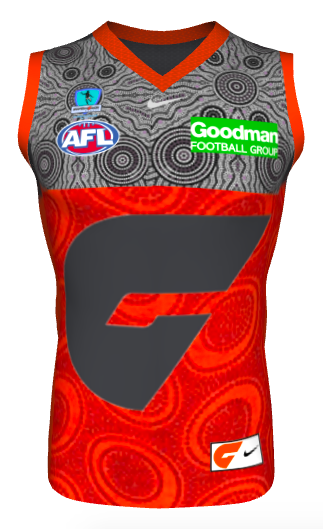 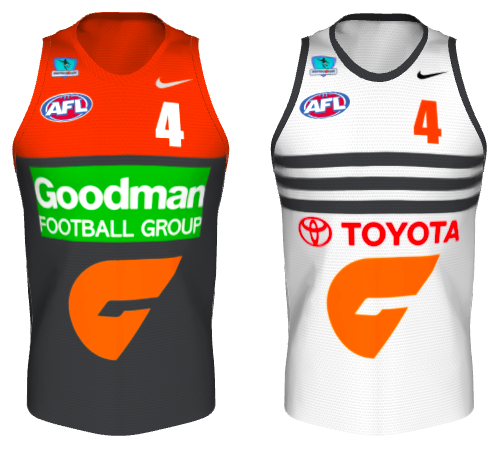 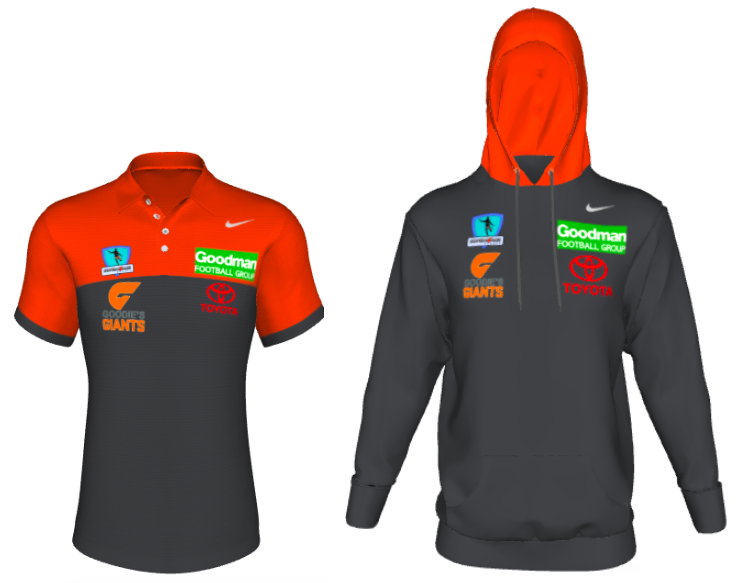 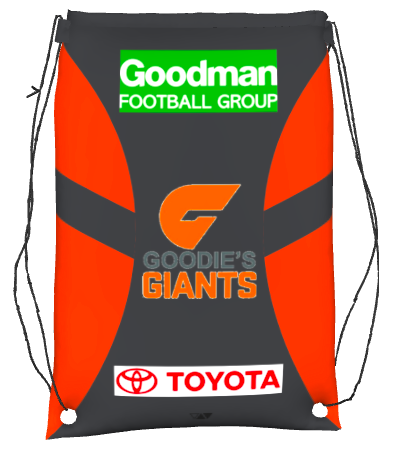 The clubs historian has taken the initiative in allocating every player that pulls on the mighty Giants guernsey as part of the clubs senior side their own player number. Where two or more players debut in the same game for the club, the player with the highest average salary will be allocated their player number first.

HOME GROUND​
'THE FURNACE'​
Located in South-East Melbourne, this 165,000 seat stadium should just be large enough to house all the fanatical Giants fans throughout the SCSUL season. 'The Furnace' is a fitting name for this stadium given the striking orange light show that forms part of the gameday entertainment at home games, coupled with the searing heat in which opposition teams will find themselves under when they come to town to take on The Giants. A world-class playing surface deserves a world-class viewing experience, and that's what Giants fans will get with top of the range bright orange padded seats installed throughout the entire stadium and giant LED screens to enhance their experience.

Players will be looked after with five-star change room facilities located beneath the playing surface, where every player has a personalised locker fully-equipped with a fridge, safe and boot stand among other things. 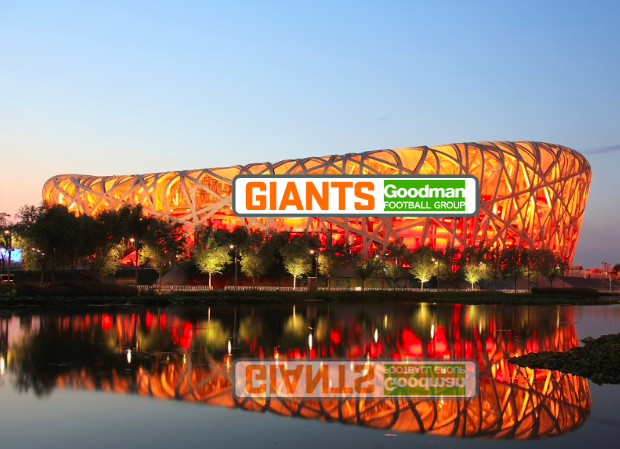 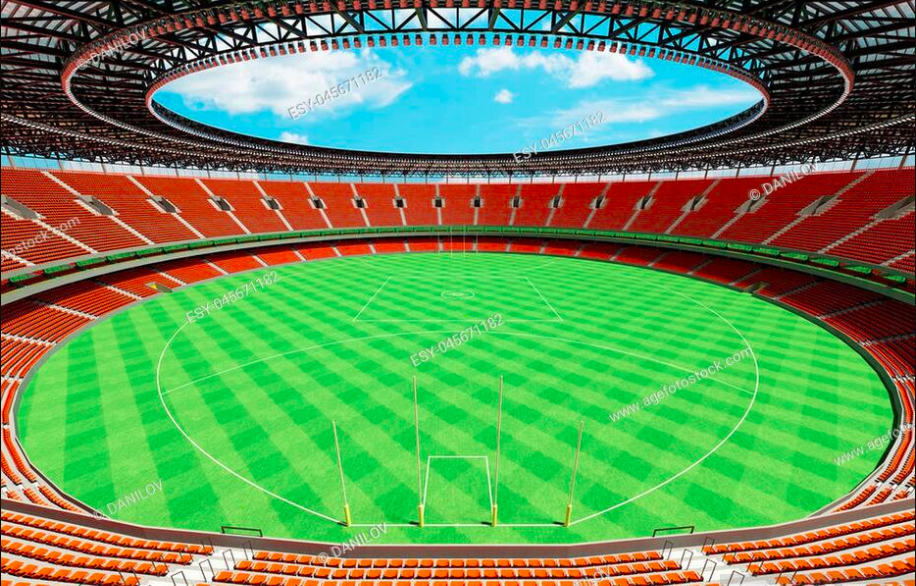 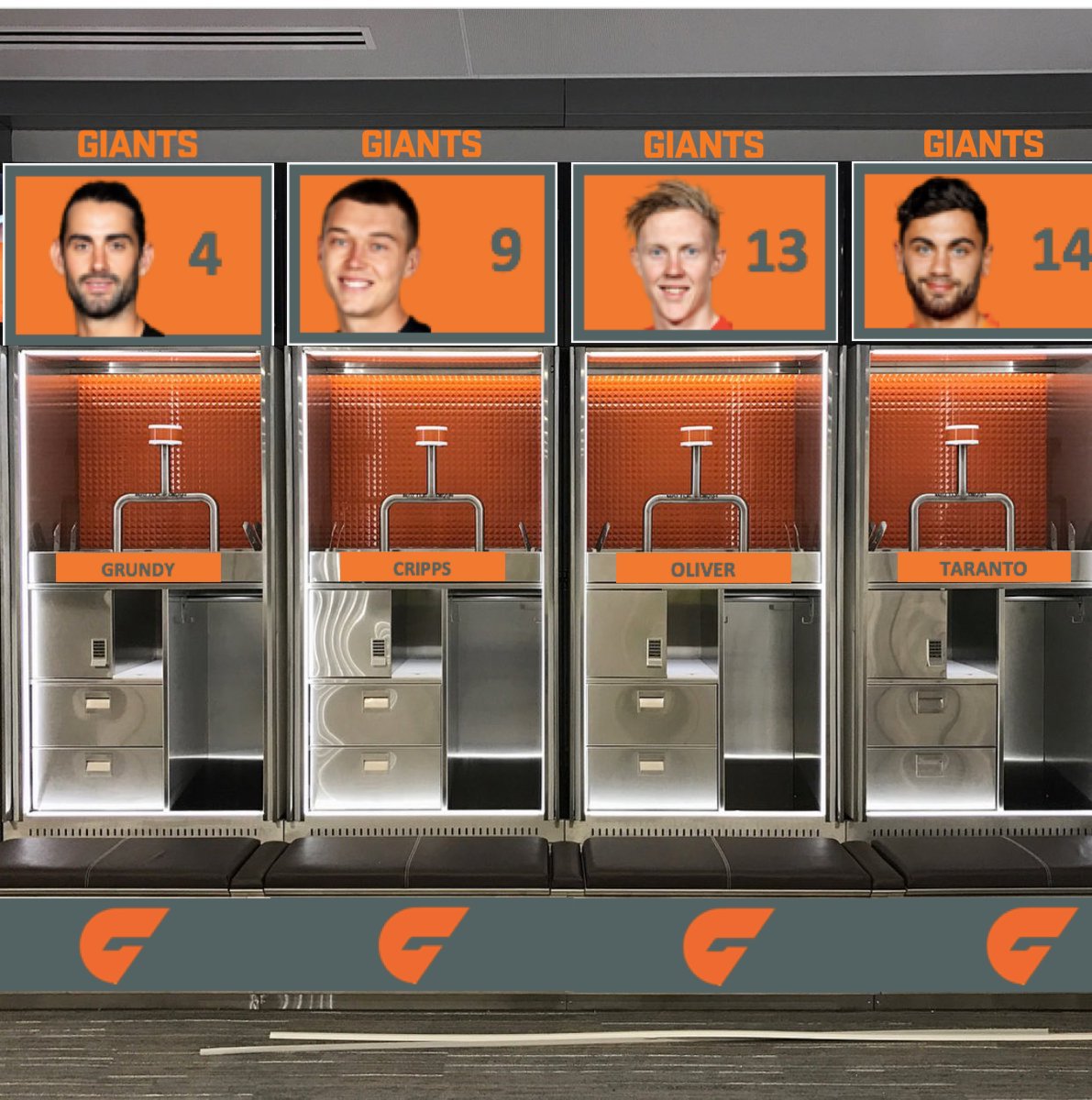 TRAINING FACILITY​
GOODMAN FOOTBALL GROUP HQ​
Housing both clubs under the GFG network, this new-age training facility is as good as it gets for the modern fantasy footballer. Located only a few hundred metres from 'The Furnace', Goodman Football Group HQ has four ovals surrounding the state-of-the-art indoor training complex, leaving ample room for Giants and Guns players to train. Heading indoors, there's an undercover oval, spacious gym, hyperbaric chamber and an Olympic size swimming pool ensuring GFG clubs are industry leaders in training, preparation and recovery. The GFG HQ has the space and potential to expanded in the future should any further club licences be acquired. 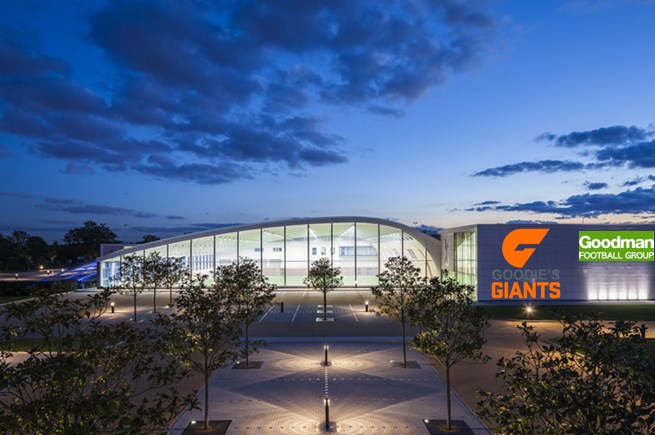 Well there's a big, big sound
From the top of the town
It's the sound of the mighty GIANTS 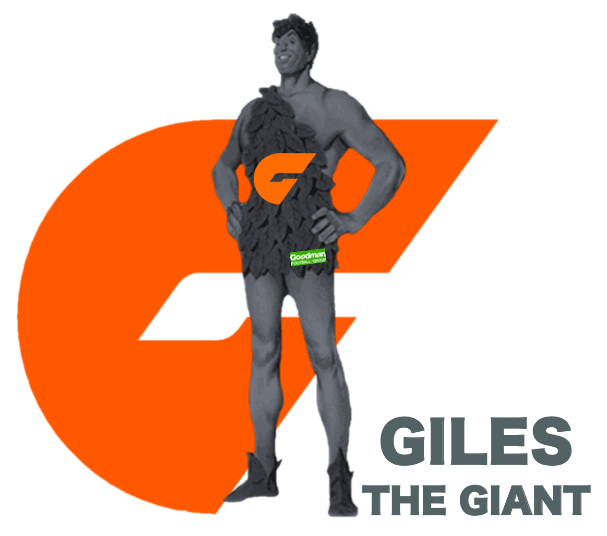 With the dust having well and truly settled on the 2020 SCSUL season, and the wounds of a devastating Grand Final loss just starting to heal, now seems an appropriate time to review The Giants inaugural season.

Leading into the 'Festival of Fantasy' The Giants were in a rich vein of form, and this well and truly continued, with the club winning 8 of 9 games in throughout the festival, making it 12 wins in the last 13 games. Goodman's side, whilst playing with confidence, were dealt some major injury blows on the eve of finals, with key players James Sicily (ACL) and Tom Lynch (hamstring) missing the backend of the season, while Wayne Milera and Luke Dunstan were put on ice for the remainder of the year. A crushing Qualifying Finals victory over Creme De La Creme set up a thrilling Semi Final contest against Jordan's Jets FC, the only side in the competition that The Giants had yet to register a victory against. Luckily The Giants come away 41 point victors, booking a place in the big dance and earning a much needed week off.

Uncharacteristically for a Grand Final side, The Giants had some big selection decisions to make in the lead up, with coach Tim Goodman delivering some heartbreaking calls on the eve of the game. Three changes were made, with Tom Lynch recalled having recovered from his hamstring injury, replacing the out of form Harry Himmelberg, Noah Anderson was a like-for-like swap for the injured James Worpel, and debutant Damon Greaves was favoured over the extremely unlucky Lachlan Sholl.

You could've been mistaken for thinking that The Giants players had turned up to the wrong ground, whilst Jordy had his boys cherry ripe for the occasion. Jed Anderson (174) set the tone early, giving The Jets the ascendancy early, whilst for The Giants, Jack Darling (50) have little to no impact on the contest (again... 2015...). Things went from bad to worse for The Giants when big bodied midfielder Patrick Cripps (26) was injured early, leaving an almost insurmountable task for the remaining Giants players. Coach Tim Goodman made the call to hand Clayton Oliver the captaincy, relieving ruckman Brodie Grundy of the role he held the entire season, and it looked to be paying off early. Oliver scored had scored the best part of 90 at HT, however went completely missing in the second half, finishing on a miserly 112. With the game all but won you'd have thought The Jets players would be lapping up the atmosphere of a Grand Final, however that wasn't the case. I'm sure Jordy won't mind me saying this, but some of his players turned to water late in the contest, Dunkley produced a so-so captains score, Wallis could get near it, and Ladhams gave away more free kicks than Phil has had Fish 'n' Chips in the last year. But alas, this wasn't quite enough for The Giants to pull off the unthinkable. The Jets came away 22 point victors to claim the inaugural SCSUL Premiership, quite fitting as they were well and truly the best side across the competition the entire season. In the post-game presser, Goodman said he was proud of his boys, and "whilst we didn't quite have the polish to get the job done today, there were plenty of positive signs moving forward."

With the offseason well and truly in full swing, coach and head of list management, Tim Goodman, has already began the exit interview process and began looking to further the list going forward, with redemption the focus heading into season 2021. 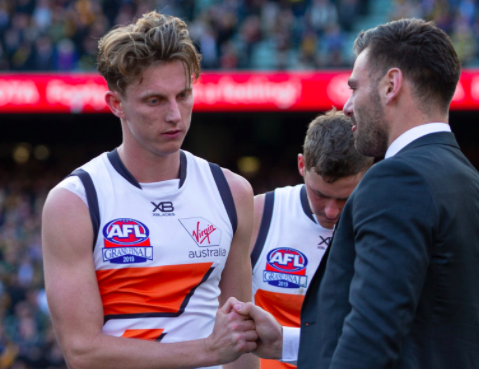 We welcome everyone to the very first Tim Goodman Medal. Tonight we will be recognising and celebrating the achievements of those individuals who have had outstanding seasons both on and off the field, including crowing the player adjudged the Best & Fairest for Goodie's Giants FC in the inaugural SCSUL season. Over the years, as the clubs history continues to grow, these award handed out tonight may be renamed in honour of those who have given so much to our great club. 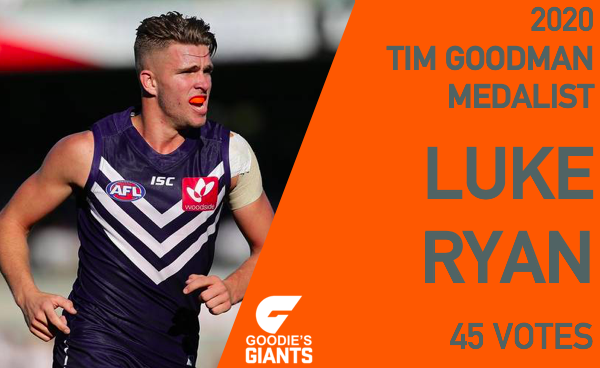 Luke Ryan has etched his name into the record books, becoming the very first Best & Fairest Winner at Goodie's Giants FC, having put together a remarkable season down back. The 24 year old intercept defender was asked to play more of a key defensive post this season after he was recruited as the sixth Giants in the 2020 SCSUL Initial Auction, on a 8 year $905,000 contract. The Giants Best & Fairest caps off a stellar year for Ryan, who finished equal third in the Lockhart Medal and also claimed Bay Villas Resort All-Ultimate Team honours. With fellow defender James Sicily to miss the 2021 season through injury, Giants coach Tim Goodman will again be calling on his star defender to produce a similar output to this year where he played all 21 of The Giants games for an average 113. 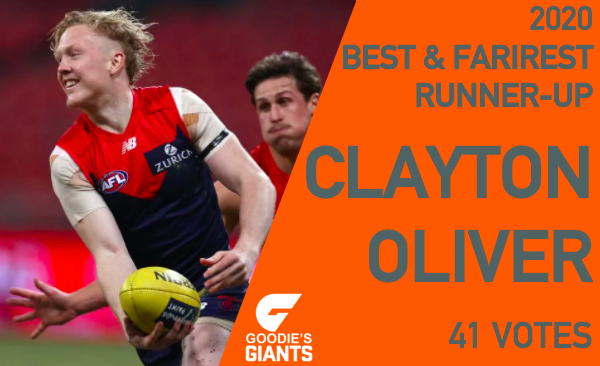 Young midfield bull, Clayton Oliver, wasted no time in setting the SCSUL alight in 2020. Some stunning performances saw him not only finish runner up in the Tim Goodman Medal, but also finish equal fourth in the Lockhart Medal and claim Bay Villas Resort All-Ultimate Team honours. Oliver averaged 130 playing all 21 games for The Giants in 2020, with the highlights of his year being a 177 in Round 2 against eventual SCSUL Premiers Jordan's Jets FC, and a Round 9 double ton (205) against the Roppongian Rangers. Oliver's consistency throughout the season was something that would have been really pleasing to see from the coaching staffs perspective, and going forward there will be external pressure on the club to hand Oliver the captaincy on occasions, as was the case in the Grand Final where he took the reigns to relieve Brodie Grundy of the duty. 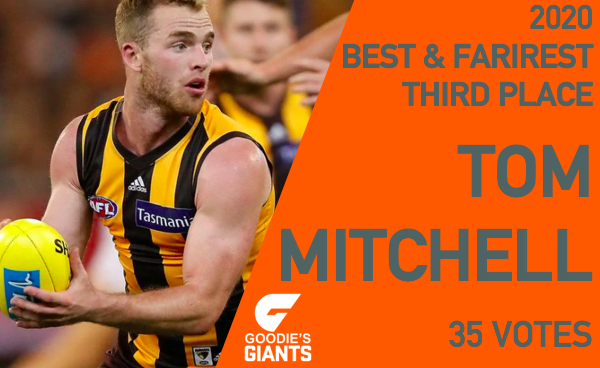 Returning from a horrific broken leg, and playing out the year with a serious shoulder injury, Tom Mitchell could've been forgiven for having an below par year. But that was not the case for the hungry midfielder, who showed remarkable courage to play out the season and produce the sort of performances he did. Mitchell played all 21 games for The Giants, averaging 115, enough to earn him a place in the midfield of the Bay Villas Resort All-Ultimate Team, as well as a Top 10 finish in the Lockhart Medal (equal 6th). Having already had shoulder surgery, Mitchell's start to the 2021 Preseason will be delayed until early next year, although the club hopes he should be right to go come Round 1. 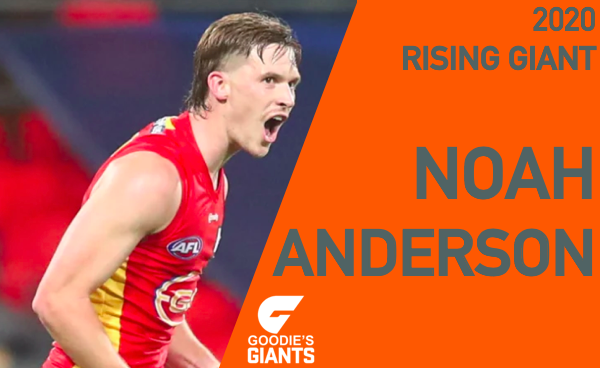 The Giants list management team were both extremely surprised and stoked to see Noah Anderson slip to Pick 3 in the 2019 Draft Class Draft, wasting absolutely no time in selecting the midfielder out of the Oakleigh Chargers footy factory. Starting the year as a winger, Anderson got a taste of senior SCSUL footy from the get go, with an injuries to Tim Taranto and Luke Dunstan, coupled with the indifferent early season from of Jack Graham, the 19 year old had to learn his craft on the go, thankfully being surrounded by star midfielders in Oliver, Mitchell and Cripps. A move into the centre bounces throughout the back half of the year was beneficial for Anderson, who as a first year player took his game to another level, and rightfully earned himself a SCSUL Rising Star Nomination for his Round 6 performance (93) against the Arcadia Timelords. One of the most pleasing things that The Giants coaching staff and fans will take out of this year and into the preseason will be the fact that Anderson rose to the occasion finals footy, with scores of 116, 90 and 88 to round out his year.​

The "Snuck Up On Him Like a Librarian" Award (Surprise Packet): Damon Greaves 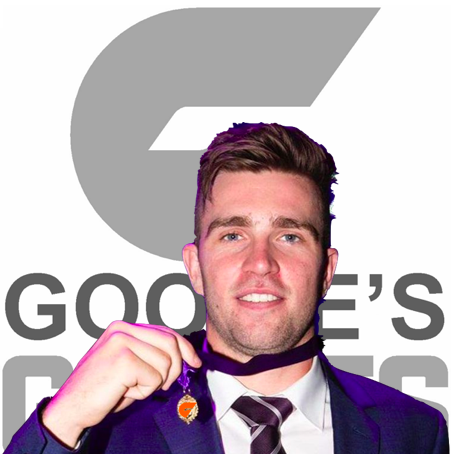