You can come by plane; you can come by road or you can come by boat. You can come to act with your fists clenched, teeth gritted and your eyes narrowed, ready to kick ass and take down The Stingers. Come to it any way but lightly. You must not come lightly to Jabukanji, for the battle ground is the high court, cathedral, war memorial and embassy of the Far North.

Do not be fooled by our size. Our sting is the deadliest in the world. There is no anti venom and the pain you will never forget.

Do not come lightly to play the Jabukanji Stingers! 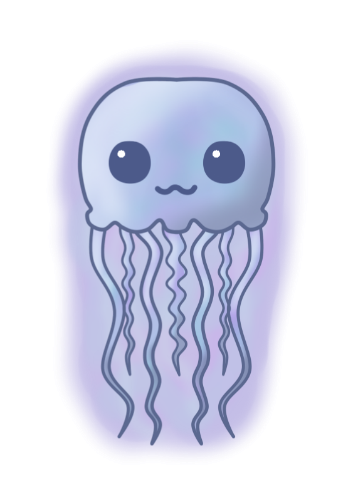 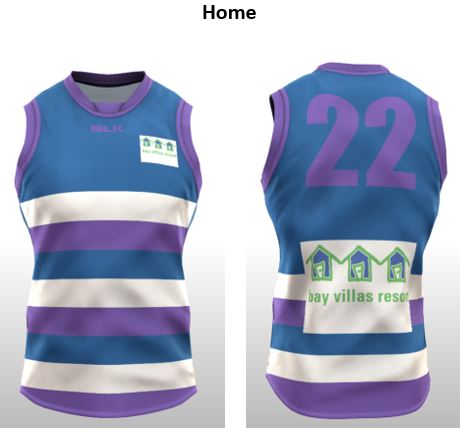 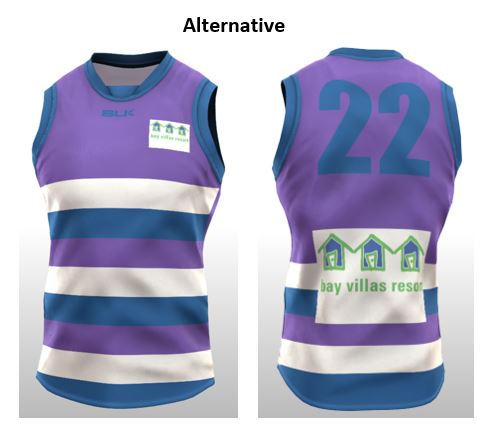 THEME SONG:
(Sung to the tune of the West Coast Eagles Fight Song)

VERSE 1
Born is pride from isolation
Our fortress built, we traverse the nation
Our colours share, the northern ocean
On our battle ground, fear our war cry

VERSE 2
We stick to your skin, through thick and thin
Feel our pain from the openin’
On our battle ground, you’re no hope of winning
It’s northern magic and it’s just beginning 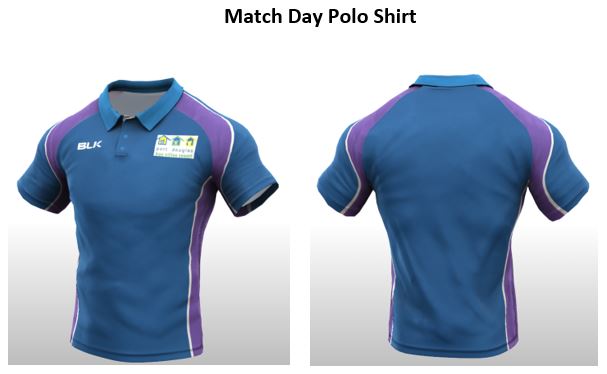 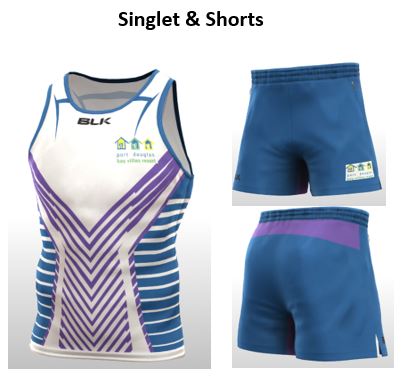 The Jabukanji Stingers went into the inaugural draft with aim of building a team of young talent. The majority of the list would be aged under 26 and signed to longer term contracts, whilst surrounded by a few older players to be competitive in the first season.

PHASE 1: AUCTION - TOP 60
Not wanting to use a large proportion in the salary cap on the top 60 players, the Stingers watched as auction prices regularly reached extraordinary heights. We targeted Riley O'Brien as a young ruck, however pulled out after the price went beyond $1.2M. Eventually, the Stingers got their man in versatile DPP Lachie Whitfield. This would eventually be the only purchase in this section of the draft.

PHASE 2: MODIFIED AUCTION - 2017 DRAFT CLASS
With the aim of compiling a young, talented list, the Stingers entered the modified auction section looking to obtained up to 8 players, however the draft order wasn't kind with selections 8, 13, 28 and 33. With this in mind the Stingers first three picks were 5 year contracts for Tristan Xerri, Luke Davies-Uniacke (#4) and Lloyd Meek. The Stingers were able to snatch away Nick Coffield (#8) from the Neptune Knights on a 4 year deal and with their last selection Jack Higgins (#17) on a 2 year deal. With the section coming to an end Paddy Dow (#3) was drafted on a 3 year deal when Goodie's Giants FC decided not to match. The Stingers walked away pleased with the overall haul in two young rucks and three top 20 draftees.

PHASE 3: SNAKE DRAFT - 2018 DRAFT CLASS
With selections 2, 19, 22 and 39, the Stingers were optimistic of bringing in some high end talent. With pick 2 Connor Rozee (#5) was eagerly selected. When pick 19 came around it was a major surprise to find Nick Blakely (#10) still on the board and with much delight he became a Stinger. Forward Curtis Taylor was chosen next and to round out the draft midfielder Xavier O'Hallaron (#22). Overall, a great section for the Stingers.

PHASE 5: SNAKE DRAFT - REMAINING PLAYERS
With pick 1 the Stingers chose 2016 #3 Hugh McCluggage, this was closely followed by ruckmen Ivan Soldo and Rory Lobb. The targets then became the 2016 Draft Class to fulfill the young talent credo. Andrew McGrath (#1), Griffin Logue (#8), Jy Simpkin (#12), Todd Marshall (#16), Brandan Parfitt (#26) and Esava Ratugolea (#46) were successfully acquired. The remaining selections were split between the old and the new, to allow the young talent time to mature into a premiership force in 2-4 years time. The Stingers were overall pleased with this section, with the inevitable tales of near misses and small regrets.

Do not come lightly to play the Jabukanji Stingers!
Last edited: 24 Mar 2021

ROUND 2
Jabukanji Stingers vs. Arcadia Timelords

ROUND 3
Neptune Knights vs. Jabukanji Stingers

ROUND 6
Jabukanji Stingers vs. Dagobah Immortals

ROUND 9
Jabukanji Stingers vs. The Darkness

The excitement was high, with an air quiet confidence the Stingers would give the opposition a good run for their money. However, with ten players scoring below 80 the Stingers were never in the hunt against the Neale (177) captained Cremes. There was much to like in the forward line, however the engine room couldn't get going with them failing to register a 100 between them. Adam Saad, Aliir Aliir and Bailey Williams did their best to stem the flow of points down back. But alas too many passengers meant a disappointing loss on debut. 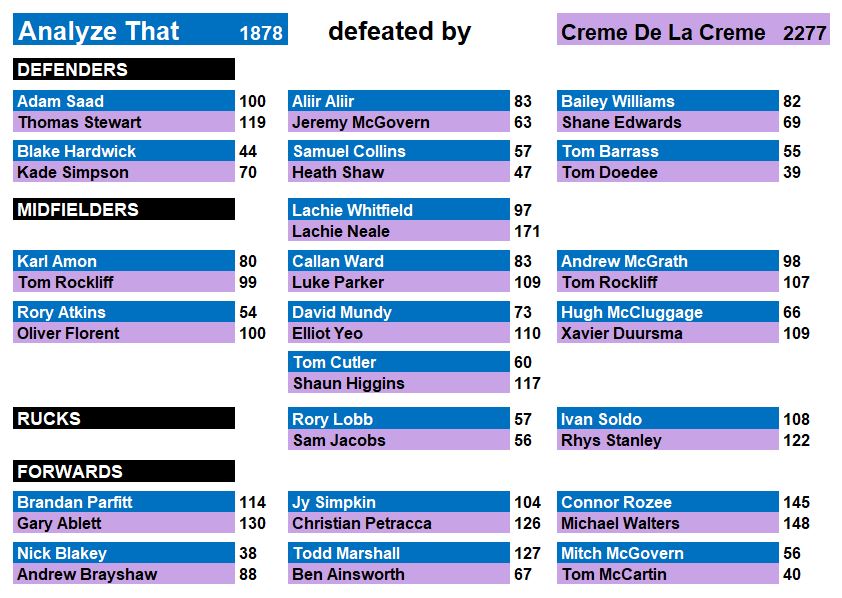 Connor Rozee was magnificent with 145. The emergency Callum Sinclair was next best underlining the woes of the Stingers on debut. Whilst Marshall, Parfitt and Soldo all showed the promise expected from them. 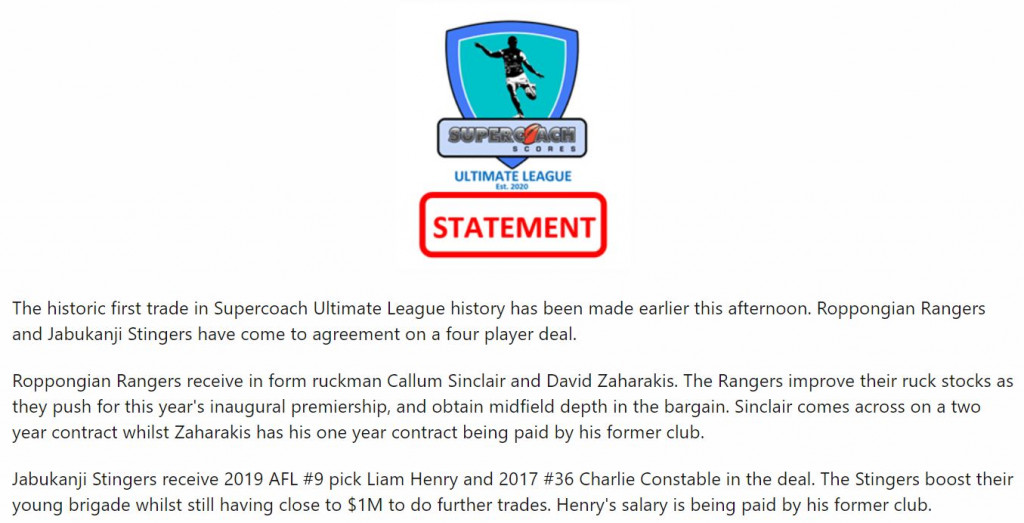 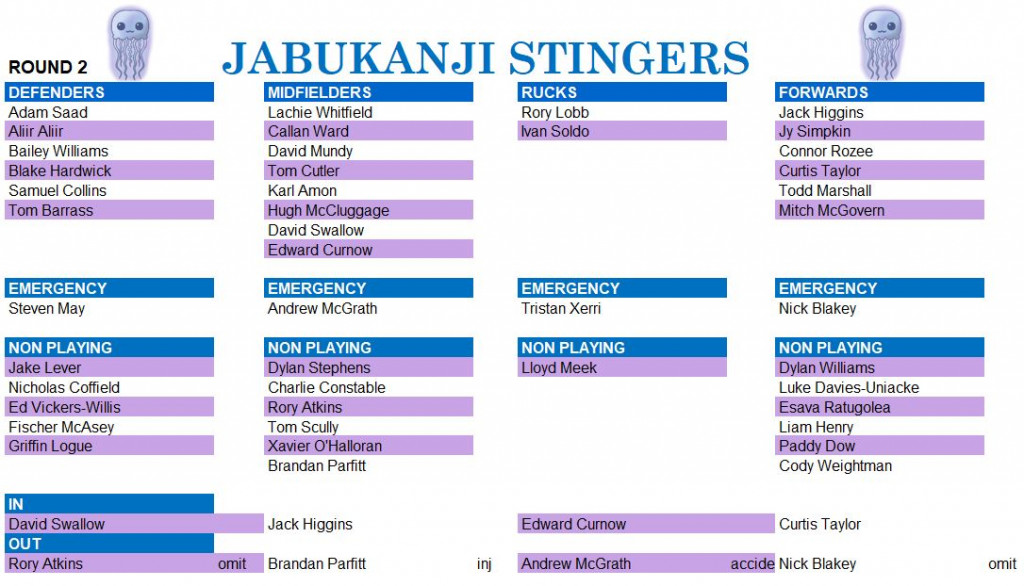 SCORE & RESULT
The Stingers welcomed David Swallow, Jack Higgins, Ed Curnow and rookie Curtis Taylor into the side for round 2. Unfortunately, Brandan Parfitt couldn't get up for the game with a minor niggle and in a major blunder Andrew McGrath was accidently omitted. 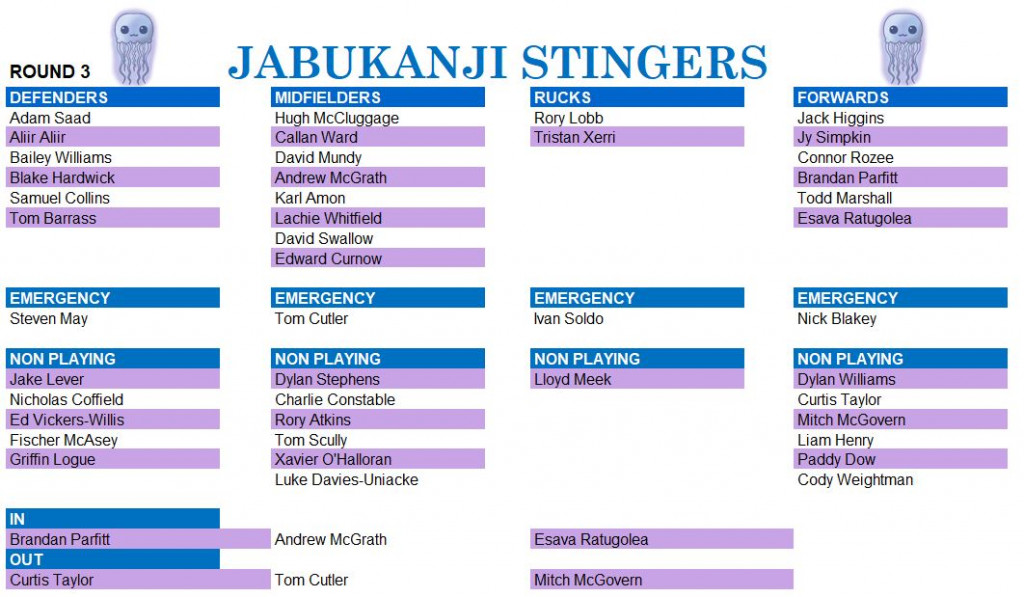 SCORE & RESULT
Brandan Parfitt and Andrew McGrath returned for round 3 whilst enigmatic forward Mitch McGovern was dropped in favour of Esava Ratugolea, as a message was sent to the playing group that performance seen in rounds 1 and 2 would not be tolerated. The Stingers responded with a hard fought victory over the Neptune Knights. Whilst not a dominating performance across the board, a number of players began to show the form expected from them. Young Tristan Xerri was a late in for Ivan Soldo, and played his part in the 84 point win. 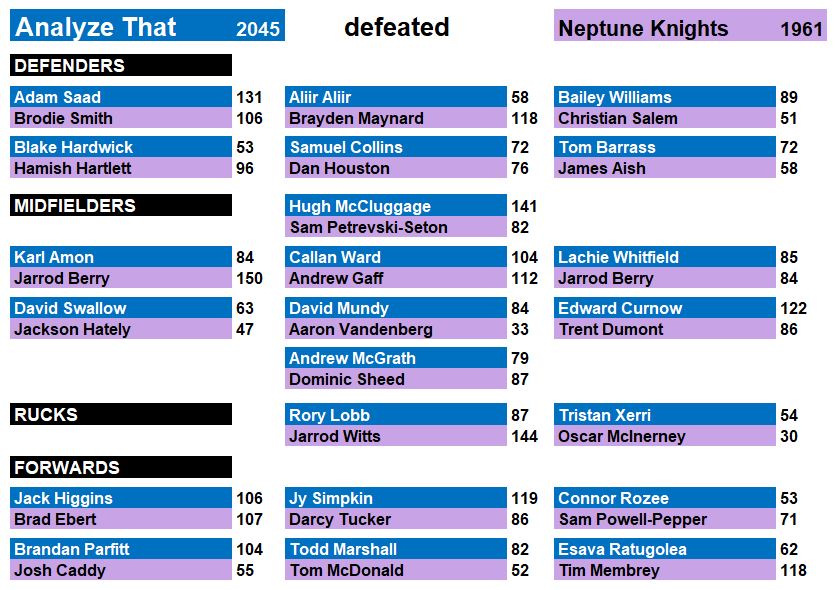 Hugh McCluggage finally showed the form expected of a number 1 pick. Whilst Adam Saad, Ed Curnow and Jy Simpkin were good again for the victors 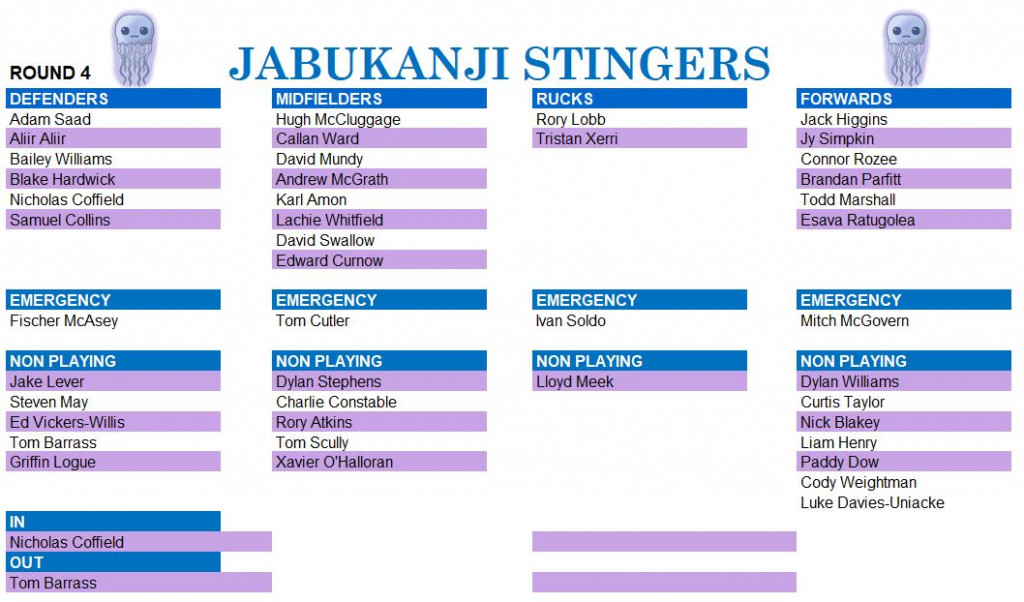 SCORE & RESULT
After last weeks victory the Stingers were expected to go in unchanged. However in a surprise, and ultimately outstanding, selection move Nick Coffield was given his debut for the club, and what a debut it was. Coffield came out firing in the Thursday night headliner and opened the scoring with 119. Unfortunately, a number of his defender colleagues were again poor, and coupled with the unreplaceable late out of Callan Ward, and Todd Marshall's first poor game, the Stingers went down by 109 points with their captain again failing to stand out when needed. A lost opportunity to defeat the ladder leader. 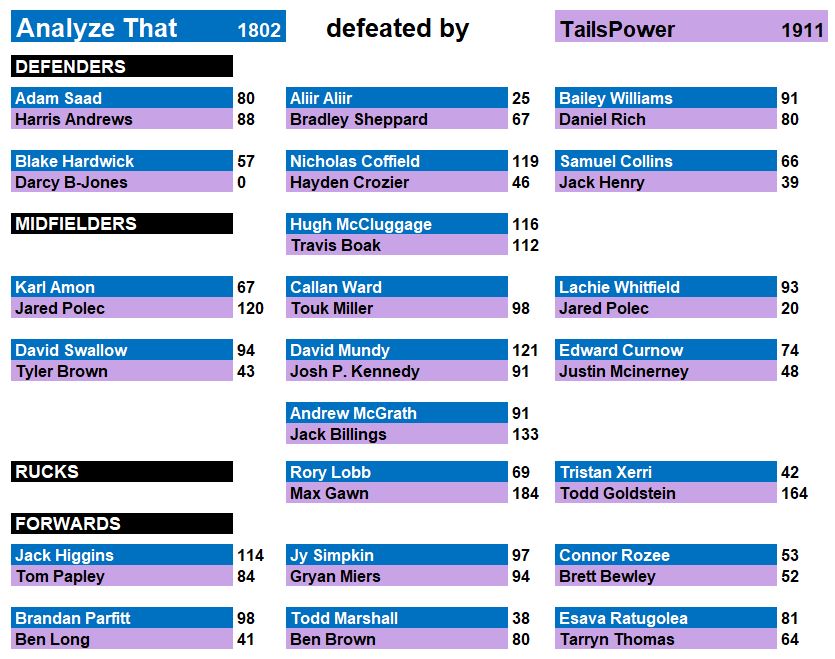 David Munday, Steven May, Hugh McCluggage and Jack Higgins were all good for the Stingers. 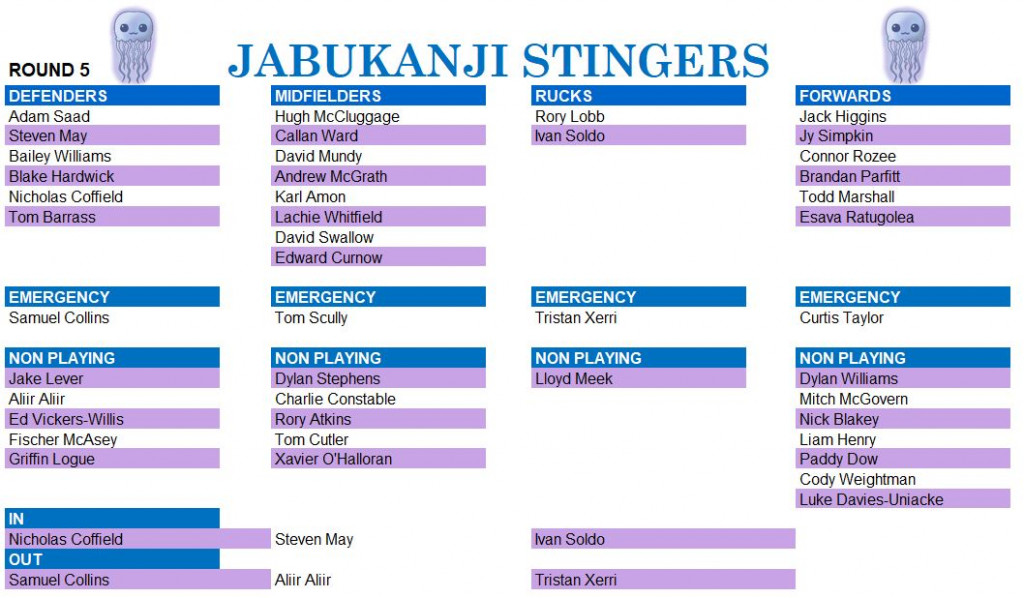 SCORE & RESULT
Aliir Aliir and Tristan Xerri made way for the more experienced Steven May and Ivan Soldo, whilst Nick Coffield retained his position for the omitted Sam Collins, Late out Callan Ward maintained his position in the engine room. Hugh McCluggage was handed the captaincy, fast becoming a poison chalice, which spurred Lachie Whitfield to new heights but failed to have the desired affect on the young star. Time off the ground for an injured shoulder didn't help his cause. The ruck division shown for the Stingers, however it was the across the board solid scores that were lacking in round 1 which ultimately won the day for the Stingers. Win number two for the preseason favourite for the wooden spoon. 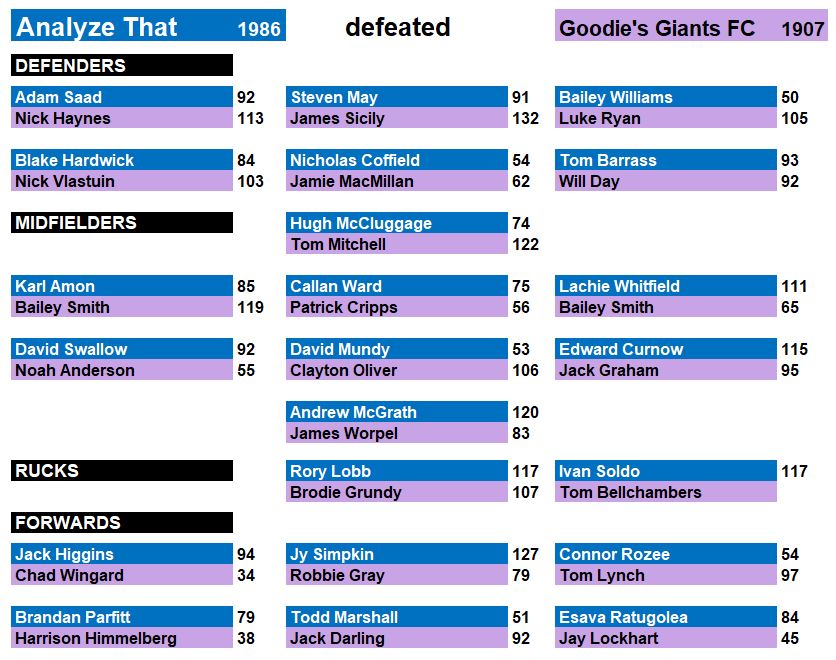 Jy SImpkin continues to shine in his break out season. Andrew McGrath continues to take great strides, whilst Ed Curnow backed up the great work of the rucks Rory Lobb and Ivan Soldo. SCORE & RESULT
After last weeks win, the Stingers decided to make only one forced change, bringing in 2019 #5 draft pick Dylan Stephens for the injured Callan Ward. Whilst the defence continued to be the backbone of the team, the midfield, rucks and forwards went missing this round, with the breakout trio of Simpkin, Rozee and Parfitt being particularly subdued. Coupled with having to tackle the Immortals Tim English starring 200 game and De Goey's 150 the Stingers were never really in the hunt. 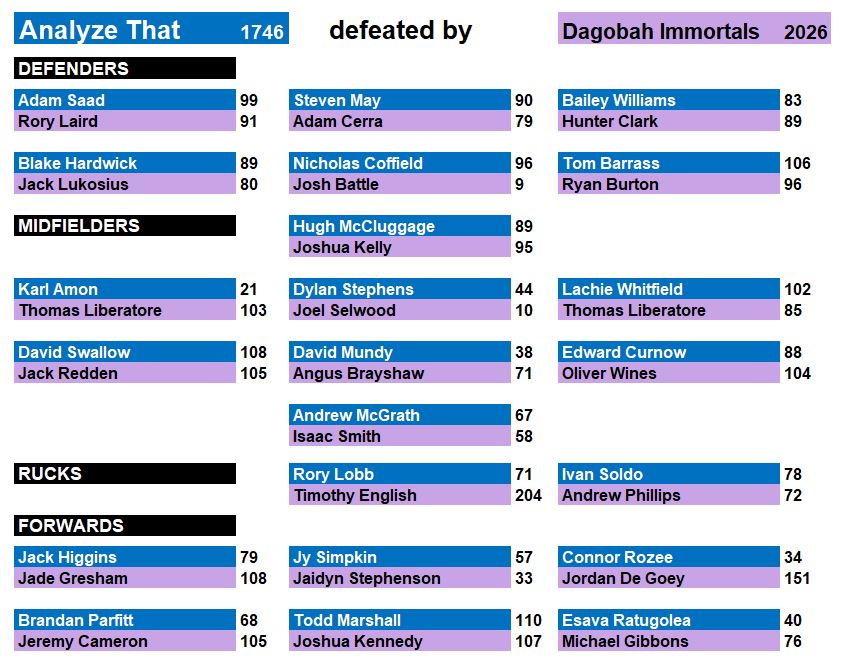 Todd Marshall was back to his best with David Swallow, Tom Barrass, Lachie Whitfield and Adam Saad providing great support. Unfortunately, there were too many passengers to overcome the Immortals.

​
With the trade deadline looming Goodie's Giants FC have bolstered their defense as they position themselves for a late run at this year's finals. The Giants have acquired key defender Steven May from Jabukanji Stingers for untried rookie Ely Smith and a swap of 2021 draft picks.

The Jabukanji Stingers are pleased to announce the arrival of Pick No. 21 at the 2018 NAB AFL Draft, Ely Smith through a trade with Goodie's Giants FC, with Steven May departing.

Smith was a late call-up to the National AFL Draft night, and the rumours that Brisbane invited him were true with the Lions selecting him in the first round. Smith has enjoyed a terrific season for the Murray Bushrangers, going from virtually unknown in draft calculations, to a first round pick. He famously missed out on Vic Country selection, then received a late call-up there too, to show off at GMHBA Stadium in the final game.

What Smith brings to the table is his terrific hands and vision in close, often winning the ball at the coalface and dishing off to a teammate on the outside with a no-fuss approach to his football. He is ready to go if required, and is a good size as that prototype midfielder.


As the trade deadline looms the Stingers will continue to look for opportunities to improve draft position and bring in young players. Defenders Jake Lever and Aliir Aliir will garner interest, whilst experienced midfielder Ed Curnow could bolster finals bound teams.

​
Goodie's Giants FC and Jabukanji Stingers have made a further trade with experienced midfielder Ed Curnow transferring to the Giants in exchange for 2018 rookie midfield bull Tom Sparrow, who will now look to break into the Stingers team either up forward or his long term goal of the midfield. Mid round 2021 draft picks were also exchanged.

Looking to the future the Jabukanji Stingers traded captain Lachie Whitfield to the Goodie's Giants FC shocking the Ultimate community. The Giants via multiple trades have rocketed themselves into premiership contention having acquired Whitfield, Steven May and Ed Curnow in recent days.

The Giants gave up the highly rated forward, 2017 pick 12, Darcy Fogarty and competitive small forward, 2018 pick 16, Ned McHenry to obtain Whitfield. They also parted with TailsPower 2021 Pre-Season Round 2 draft pick acquired earlier in the season. Some salary swallowing was also involved in the deal.

The Stingers have restructured their list bringing in highly rated youngsters who they hope will be the foundation of the team for many years. Given their current position on the ladder, they will go into the 2021 Pre-season draft with four selections in the top 21, providing a further injection of young talent.

In the other trade for the day, The Darkness acquired tall forward Billy Frampton from the Giants for their 2021 2nd round and 7th round picks with the Giants round 5 and Stingers round 6 coming back their way.

Teams are now set leading into the Festival of Fantasy and the inaugural finals.
Last edited: 23 Mar 2021