Courtesans said:
Leagues for me, haven’t the trades to play with. Cash out Flynn, Jordan to start with.
Click to expand...
Unless you're desperate for wins and need the cash, Flynn has another week or two in him still of cash generation. Leagues are very much about milking every last drop out so that you can make sure you're getting the Bont, Oliver, Lyons types instead of value chasing.

Clavarino. Sounds like a small musical instrument from the Baroque period

Wheedus said:
Clavarino. Sounds like a small musical instrument from the Baroque period
Click to expand...
maybe he’ll become the pied piper to take the Rats away from the team! 😂
https://en.m.wikipedia.org/wiki/Pied_Piper_of_Hamelin
B

wolfbunny said:
maybe he’ll become the pied piper to take the Rats away from the team! 😂
https://en.m.wikipedia.org/wiki/Pied_Piper_of_Hamelin
Click to expand...
I was actually hoping he'd bring out the instrument for the team song, which is likely they'll be singing after the game this weekend if you trust the bookies odds.
Last edited: 27 May 2021

Pretty keen to get a good look at Bianco, if he stays injury free I think he'll be worth picking up in a couple of weeks all things going well.

NT.Thunder said:
Pretty keen to get a good look at Bianco, if he stays injury free I think he'll be worth picking up in a couple of weeks all things going well.
Click to expand...
Well and truly in my sights, best bye for me although given when I'd be grabbing it's also the worst

Thinking of moving Cox to the FWD Line for Murray from the Crows. Whats his JS Like.?

Wouldn't mind knowing if any of these cheap R/Fs are going to get a go. Makes a pure Ruck like Reeves less appealing if I can pair two R/Fs.

jaca said:
Wouldn't mind knowing if any of these cheap R/Fs are going to get a go. Makes a pure Ruck like Reeves less appealing if I can pair two R/Fs.
Click to expand...
I would assumed Edwards would get some games pretty soon for North.

AngryAnt said:
I would assumed Edwards would get some games pretty soon for North.
Click to expand...
There we some comments earlier in this thread suggesting Edwards would be absolutely no chance of playing senior footy this year. How accurate those comments are I dont know...

Edit: sorry, comments were made in the Ruck Discussion thread

The Experiment said:
There we some comments earlier in this thread suggesting Edwards would be absolutely no chance of playing senior footy this year. How accurate those comments are I dont know...

Edit: sorry, comments were made in the Ruck Discussion thread
Click to expand...
I guess that answers that then.
M

Is Matt Parker a chance to get named tonight for Dreamtime at the O?

He is already in Perth after all

Ironhawk said:
Do you happen to have access to the link in this? Pay wall...
Click to expand...
Mid-season draft: Best KFC SuperCoach AFL prospects rated
A host of rookies will soon be added to KFC SuperCoach after the mid-season draft — here’s who should be on your radar.

At a difficult period of the season for KFC SuperCoaches, the mid-season draft may provide some welcome relief.
More picks were used than initially expected, with 22 players finding new homes – including a host of mature-age prospects from the state leagues.

It is these players in particular who will be of interest to coaches, given they are more likely to be used in the short-term, stand up to the rigours of AFL footy and score well.

The rest will be at bargain basement rookie price, which is an added bonus for coaches looking to downgrade across the byes and towards the end of the season.

These are the 10 mid-season draftees to watch out for in the run home in KFC SuperCoach. Jai Newcombe seems destined for an early chance at Hawthorn.

Newcombe dominated headlines in the lead-up due to his nominated draft terms, and the 186cm, 85kg midfielder looms as one of the better mid-season rookie options for KFC SuperCoaches. The 20-year-old averaged 23.3 disposals at 77 per cent, 7.3 tackles, 5.8 clearances and 112 KFC SuperCoach points for Box Hill in the VFL, suggesting he can step in and play a role from the get-go.

Moyle shapes as more of a long-term proposition but Gold Coast’s ruck shortage may see the 204cm big man given an opportunity at senior level in 2021. Moyle, 19, averaged 111 points in four NAB League games and 61 points across three VFL matches for Collingwood – including 17 disposals, 11 contested possessions, 19 hit-outs and 82 points against Coburg. Veteran Zac Smith isn’t setting the world on fire, so the Suns could look to Moyle in the back-half of the season. 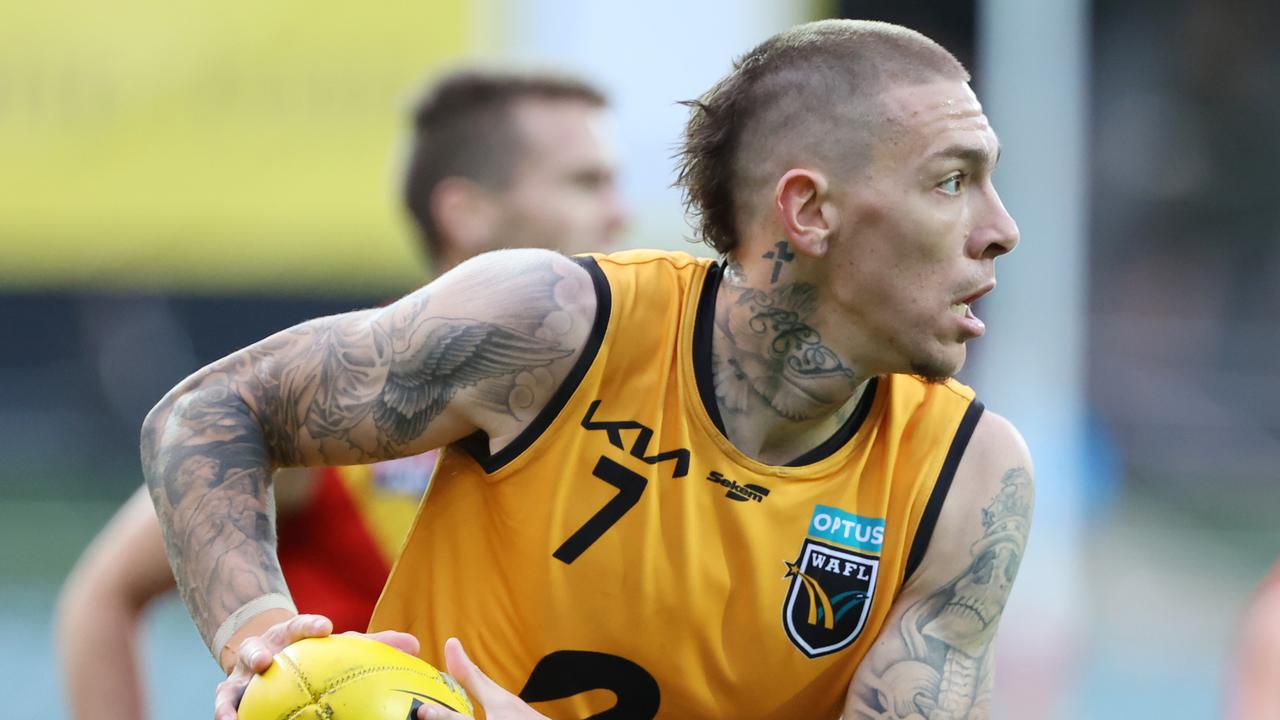 A KFC SuperCoach cash cow back in 2019, Parker, 25, has fought his way back onto an AFL list with a scintillating campaign for South Fremantle after being delisted by the Saints last year. The high-impact forward is finding more of the footy, averaging 20.4 disposals, 6.7 score involvements, 4.4 tackles and 99 points — capped by 25 touches and four goals against West Coast’s reserves last week. Will come at a higher asking price than other mid-season draftees after averaging 37.5 points from two games last year, but the 25-year-old averaged 53.5 points across 17 games in 2019, and should have more footy coming to him inside 50 once he breaks into the Richmond side. Kye Declase has won a list spot after training with Melbourne in pre-season.
Kye Declase (Melbourne)

Declase is a ready-made option who is capable of playing all over the ground and thrives on the outside. A 195cm prospect, the 24-year-old has averaged 22.2 disposals, 16 kicks (at 70 per cent efficiency), 7.4 marks, kicked six goals and averaged 95 KFC SuperCoach points in five matches for Werribee in the VFL this season. His versatility means he should get a look-in at the Demons if injury strikes. Eighteen-year-old key forwards are generally risky KFC SuperCoach buys but Callow is built like a seasoned tall at 195cm and 96kg. The powerful Callow amassed a monster 184-point total for Norwood against Adelaide’s SANFL side, registering 24 disposals, 18 contested possessions, seven contested marks and an inaccurate 3.7 – he could have been on track for Jonathan Brown’s record-breaking 283 if he kicked straight. The Hawks have Mitch Lewis and Jacob Koschitzke as their two forward-line talls at the moment, but Callow will be waiting in the wings and is AFL ready from a physical perspective. A mature-age forward from the SANFL, Johnson looms as one of the most likely mid-season draftees to feature in the next month. The athletic forward was playing SANFL reserves last year but developed into one of the country’s best mature-age draft prospects in the past 12 months. Johnson has tallied 91 ranking points or more in four of his six games this year and the goal-starved Pies will find it hard to resist giving him a debut if he performs strongly in the VFL. He could be perfect forward bench cover during the run home.

The Dons were linked with forward Jackson Callow and defender Angus Baker before the mid-season draft but instead went for midfielder Sam Durham. The Dons flagged Durham would be a player capable of pushing for a senior debut this season after being nabbed from Richmond’s VFL program. He’s a player noted for his work on the outside and skills, going at 80 per cent disposal efficiency in the VFL this season. Might not play much, but he should be on your watch list if other midfield rookie options don’t present. His SANFL numbers from this season are certainly eye-catching, but how is McEntee going to break into one of the AFL’s premiership contenders? He has featured as an on-baller for Sturt and averaged 105 ranking points in his past five SANFL games. The Power said McEntee’s skills would be suited to their “front half”, which suggests any senior chance he gets this year could be as a small forward. Even then, it’s a long shot. Put him on the 2022 watch list instead.

West has been one of the dominant midfielders in the WAFL this year, averaging 27.4 disposals, four marks, seven tackles and five clearances a game. He’s likely a fair way down the pecking order in the Eagles’ midfield, which has just regained Elliot Yeo from injury. As a mature-age draftee he will be ready to make an impact if called upon, but seems more likely to stay on the fringes. He’ll be worth monitoring if he gets a chance though based on his state league numbers. Blues recruiting boss Nick Austin must have liked what he had seen from Boyd to pluck him from his former club’s Footscray VFL program. Boyd has mixed his time between attack and defence in the VFL this year and his best game was a 79-ranking point outing against Frankston. The positives for his KFC SuperCoach potential are he loves to kick the footy – 67 of his 83 disposals in the VFL this year were by foot. He’s still unlikely to be a massive scorer though.